In Pole Position, we talk to people driving electric when they’re charging. Ridr Bouhrin is a taxi-driver waiting at the taxi stand at Amsterdam Central Station. He doesn’t have a lot of time because of the priority arrangements at Central Station.

One in three taxis has to be electric at busy taxi locations since June 2018. The priority arrangements have turned Amsterdam Central Station and Schiphol Airport into a popular EV-driving hotspot.

What are you driving?

‘I’m driving a Nissan Leaf. Mainly because of budget reasons.’

Why did you start driving EV?

‘I’ve mainly started driving EV, because of priority arrangements for taxis in Amsterdam and Schiphol. For me, that means that I can quickly get new clients, and since time is money that truly helps me out. I rarely have to wait in busy locations like this one.’

“I’m not really the save-the-environment kind of guy”

Is sustainability important to you?

I’m happy that there’s fewer emission, but it’s not my main motivation. I’m not really the save-the-environment kind of guy. Though I’m aware that, if I was driving a regular car, I would be polluting the air eight hours a day. So, I’m happy I’m doing my part there. Now that I think about it, I must admit, since I’ve been driving an EV I sold my scooter. I go everywhere with my bicycle now. And also, I’ve started doing recycling. So, maybe I’ve become more of an environmentalist than I was aware of myself.

It’s a lot cheaper. I think it saves me about 40% of my costs. Also, since I’m driving the Nissan Leaf I usually make some small talk with other E-driving taxis. E-driving a taxi seems to form a bond.

Well, there’s not enough charging points in the city of Amsterdam yet. So, sometimes I get a bit worried about my range. I hope there’s something that can be done about that soon!

Any suggestions to Allego?

It would be great if Allego could put some sanitation next to or close to the charging points. Maybe have it solar-powered to make it sustainable. Especially here at Amsterdam Central Station; there’s nothing here for taxi-drivers. 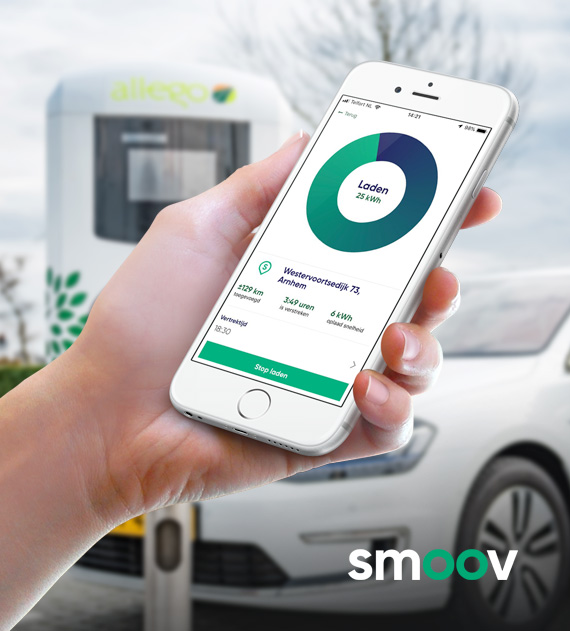 Charging has never been so easy.

We use cookies to personalise content and ads, to provide social media features and to analyse our traffic. We also share information about your use of our site with our social media, advertising and analytics partners who may combine it with other information that you’ve provided to them or that they’ve collected from your use of their services. You consent to our cookies if you continue to use our website. More information.